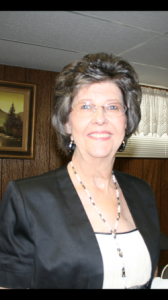 Alma Ruth Fritts, was called home to be with God, the heavenly father, on January 12, 2016 at her home in Apopka, Florida, while surrounded by her loving family.

Alma was born February 17, 1942, in Bluff City, Tenn., as the daughter of Rev. Charles Emery Lewis and Edelle Hicks Lewis. Alma graduated from Bluff City High School and married the love of her life, Lawrence Fritts, who remained by her side as her best friend and husband for more than 55 years. Before moving to Florida in 1989, Alma was co-owner of Fritts Grocery and Supply in Mountain City, Tenn.  Subsequently, she was Vice President of Finance for Christian Duplication, a worldwide manufacturer and distributor of faith-based materials.

Even throughout her late struggles with Alzheimer’s disease, Alma maintained her sweet demeanor, which touched all who were blessed by her presence. She is preceded in death by her parents, her two brothers, Jack Lewis and Lawrence Lewis, as well as her niece, Kim Lewis.

As a woman of true faith and a servant of God, Alma was a member of the Wekiwa Springs Baptist Church in Apopka, Fla., and Pleasant Grove Baptist Church in Mountain City, Tenn. Her passions included active involvement in her church and spending quality time with her family, who were the pride and joy of her life. Her family and friends will always remember how Alma saw through love’s eyes and brought joy to others through her warm smile, kindness and compassion toward others.

The Fritts family welcomes your healing prayers and support during this difficult time. Family and friends are invited to share in a celebration of Alma’s life as follows:

Funeral Service: Saturday, January 16th at 2 p.m. at Mountain City Funeral Home  and will be officiated by Pastor Jim Normon. Music provided by loving cousins from the Fritts family.