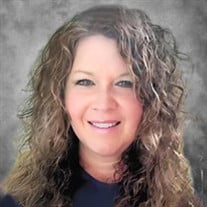 On Thursday, September 29, 2022 our precious Angela Michelle Burrow passed away at Vanderbilt University at the age of 51. Angela was born in Elizabethton, a daughter of Rodger Dale and Sheila Kay (Nidiffer) Burrow. Those preceding Angela in death are her paternal grandparents, Ossie and Gene Burrow; her maternal grandparents, John and Georgie Nidiffer; her aunt and uncle, Terry and Charlotte, her aunt, Jane, her uncle, William Nidiffer and her aunt, Wilma Hoffman.

Angela was a very talented, caring woman that lit up a room whenever and wherever she was. She loved her family infinitely and was a strong Christian woman of great faith. She was a dietary manager at Hillview for some time but had also worked for the Carter County Sheriff’s Department, Sycamore Shoals Hospital and Unicoi County Hospital. Angela enjoyed baking cakes, working outside in her yard and cooking for others and events. Her favorite thing to do was to take care of others and being the best mom ever!!!!

A celebration of life to honor Angela’s life will be conducted at 7:00 PM on Thursday, October 6, 2022 in the Chapel of Peace at Tetrick Funeral Home of Elizabethton with Pastor Bobby Burrow officiating. The family will receive friends from 4:00 PM until 7:00 PM in the funeral home chapel prior to the service on Thursday.

The committal and entombment will be held in the Happy Valley Memorial Park –Mausoleum of Faith at 10:00 AM on Friday, October 7, 2022. Active pallbearers will be Kaleb Whitehead, Jackie Cable, Richie Burrow, Rick Nidiffer, TJ Souannakhily, Jimmy Dale Burrow and Michael Burrow. Honorary pallbearers will be Jonathan Nidiffer and Russell Hodge. Those wishing to attend the committal service are asked to meet at the cemetery at 9:50 AM on Friday.

Those who prefer memorials in lieu of flowers may make donations to the Shriner’s Hospital for Children, 950 West Faris Road, Greeneville, South Carolina 29605 in memory of Angela.

Our family would like to thank the doctors and nurses at Vanderbilt University for the care and compassion shown to Angela and our family during this difficult time.

Words of sympathy may be shared with the Burrow family on our website, www.tetrickfuneralhome.com. Tetrick Funeral Home, Elizabethton (Office 423-542-2232, service information line, 423-543-4917) are privileged and honored to serve the family of Angela Michelle Burrow.