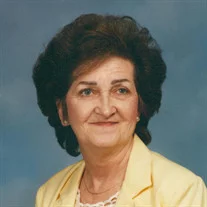 Annie Sue Merryman Little, age 95, passed away on January 6, 2020, the seventieth wedding anniversary of her marriage to TJ Little, Sr., at Ivy Hall Nursing Home following a lengthy illness. Mrs. Little was a native of Hartsville, Tennessee and moved to Elizabethton in 1929.
Mrs. Little was preceded in death by her husband, TJ Little, Sr. in 1999, her son, TJ Little, Jr. in 2019, along with brothers, Ernest Merryman, Raymond Merryman, Fred Merryman, D.J. Merryman, Lewis Merryman, and Roy Merryman, Sr., and sisters Lucy Stair, Frances Ward, and Jesse Scott.
During her lifetime, she was a Cub Scout Den Mother and member of Sycamore Chapter #163 Order of Eastern Star, having previously served as Worth Grand Matron. Mrs. Little was very active in her church, Valley Forge United Methodist where she was a member and Sunday School teacher for over sixty years. Mrs. Little enjoyed traveling, gardening and spending time with her grandchildren and great-grandchildren.
Survivors include her son, Thomas (Lynn) Little, daughter, Linda (Rick) Baughman, grandsons, Michael (Amanda) Little, David (Erica) Little, Joseph (Ashley) Little, Wesley Baughman, and Alex Baughman, and her granddaughters, Rachel (Steve) Hyder, and Rikki Baughman. She is also survived by eleven great-grandchildren.

A service to honor and celebrate the life of Sue Little will be conducted at 7:00 PM on Wednesday, January 8, 2020 in the Chapel of Peace at Tetrick Funeral Home, Elizabethton. Music will be under the direction of Judy Little, pianist. The family will receive friends from 5:00 PM until 7:00 PM in the funeral home chapel, prior to the service on Wednesday or at the residence of her son, Tom Little, at other times.

The committal and entombment will be conducted at 10:00 AM on Thursday, January 9, 2020 in the Mausoleum of Peace at Happy Valley Memorial Park. Active pallbearers will be Michael Little, David Little, Joseph Little, Alex Baughman, Wesley Baughman, Steve Hyder and Thomas James Little. Those wishing to attend the committal service are asked to meet at Tetrick Funeral Home, Elizabethton at 9:15 AM on Thursday, to go in procession.

The family would like to extend a special thanks to Ivy Hall Nursing Home, Judy Deloach, Kristi Allen, Lisa Jones and Terry Pope for their very loving care of our mother during her illness.

Messages of condolences and sympathy may be sent to the family through our website at www.tetrickfuneralhome.com
Tetrick Funeral Home, 211 North Riverside Drive is serving the family of Sue Little. Office: (423) 542-2232 Obituary: (423) 543-4917