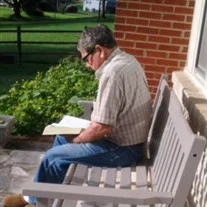 Ardin Earl Gentry, age 87, of Elizabethton, Tennessee went home to be with the Lord on Monday, January 4, 2021 at the Sycamore Shoals Hospital. Ardin was born in Carter County to the late Emerson and Minnie Katherine Collins Gentry. In addition to his parents, he was preceded in death by two brothers, Ray Gentry and Bobby James Gentry.

Ardin was a machine operator at Sperry Univac. He had also worked for the State of Tennessee and the Elizabethton City School System. Ardin was a United States Army veteran, having served in the Korean War. He was a member of Centerview Church of Christ and enjoyed farming.

A private entombment will be conducted at Happy Valley Memorial Park- Mausoleum of Peace.

Online condolences may be shared with the family on our website, www.tetrickfuneralhome.com Tetrick Funeral Home, Elizabethton is honored to serve the Gentry family. Office 423-542-2232, service information line, 423-543-4917.