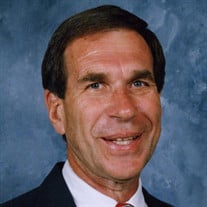 Donald William “Bill” Tetrick, age 78, of Elizabethton, died Friday, October 7, 2022, in the Johnson City Medical Center following an illness of six months. Bill was born March 26, 1944 in Elizabethton. He was the son of the late Donald W. Tetrick, Sr and Frances Jane Smith Tetrick. Bill lived his whole life in Elizabethton, a community he loved and was always loyal to.

Bill graduated in 1962 from Elizabethton High School where he was a star forward on the basketball team. His senior year the team won the Big 7 Conference Championship and Bill was the co-captain of the team. Following graduation from Elizabethton High School Bill went to Davidson College and then on to East Tennessee State University, graduating in 1968 with a degree in Business Administration.

He was in the United States Marine Corps Reserves serving for six years. During his tenure in the Marine Corps he was on the basketball team that won the Fleet Marine Corps Basketball Championship of the East Coast. For many years Bill also raced NASCAR Late Model Sportsman Racing, racing on many dirt and paved tracks throughout the southeast.

Bill coached Church League Basketball for the First United Methodist Church and Boys Club Basketball for many years. He was a Cub Scout Den Leader for five years.

Bill was a member of Memorial Presbyterian Church of Elizabethton where he served as a Deacon.
He owned and operated Happy Valley Memorial Park since 1980, where he worked hard to make the cemetery one of the finest cemeteries in the southeast.

He was a lover of animals, enjoying his horses, dogs and cats. Bill enjoyed traveling with his wife and family to many parts of the world. He and his wife Julie were fortunate enough to go two times to Africa on photo safaris of the African animals.

A funeral for Bill Tetrick, will be conducted at 2:00 P M Sunday, October 16, 2022, in the Memorial Presbyterian Church of Elizabethton with Rev. Tim Mindemann officiating. Music will be under the direction Ziad and Katie El Helou, Teri Money, pianist and David Arney, organist.

A committal at Happy Valley Memorial Park will immediately follow the funeral. A military graveside will be conducted at the committal and the service will conclude with Jon Shell playing the bagpipes.
Active pallbearers who are asked to meet at the church by 1:45 PM Sunday will be; Tyler Tetrick, Garry Holly, Russell Hensley, John L Bowers, III, Charlie Bowman, Jeff Lewis, Mike Brock, Austin Clawson, Kyler Lewis, Kilroy Hill and Jeff Davis.

The family will receive friends on Saturday, October 15, 2022 from 6:00 PM till 8:00 PM in the chapel of the funeral home. Friends may register at the funeral home at their convenience.
Those wishing to make donations in memory of Bill may donate to the Memorial Presbyterian Church, 100 East F Street, Elizabethton, TN 37643

Words of sympathy may be sent to the family through our website, www.tetrickfuneralhome.com.
Tetrick Funeral Home-Riverside Chapel, 211 North Riverside Drive (423-542-2232) is honored to serve the family of Bill Tetrick.