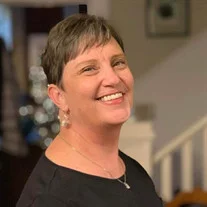 Dr. Carrie Beth Swanay, 55, was called to her eternal home with God on July 24, 2019. She was born on Aug. 1, 1963, in Johnson City to Henry Milburn Swanay and Patricia June Swanay.
Carrie was a lifelong resident of Johnson City who enjoyed living in and renovating her childhood home. As a child, she attended Bethlehem Lutheran Church where she served as an acolyte; in her adult years, she was a faithful member of Wesley Memorial United Methodist Church serving as audio/video technician for the 8:45 a.m. service.
A graduate of Science Hill High School, Carrie earned her bachelor’s degree in broadcast communications and her master’s degree in digital media curriculum/instruction from East Tennessee State University (ETSU) in Johnson City. She received her doctorate in digital media curriculum/instruction from Virginia Tech in Blacksburg.
Carrie launched her broadcast career at age 17 at WJHL-TV Channel 11 in Johnson City, where she worked for 10 years and served as the station’s video production manager, director of newscasts, producer, videographer, editor, and production assistant.
In 1990, Carrie joined the Milligan College faculty as professor of communications and served as the area chair for performing, visual and communicative arts for the past 10 years. During her time at Milligan, Carrie taught a variety of digital media and video editing courses. She also supervised MC Productions, the student-led video production service for all campus streaming events, including Stampede TV weekly shows and the campus FM radio station, WUMC 90.5. In April, the video production lab in the Paxson Building at Milligan was dedicated in a special ceremony to Carrie.
Since 1988, Carrie served the local community as video broadcast supervisor for monthly meetings of the Johnson City Commission and the Kingsport board of mayor and aldermen. She was honored by the Johnson City Board of Commissioners in June 2019 for her 30 years of service to her community. Since 2010, she worked as video coordinator for Science Hill High School football games, supervising the stadium jumbotron and pre-game production.
In other professional work, served as director/producer for the IMAG Presentation System at ETSU; was a media/ministry presenter at the North American Christian Convention/Youth in Ministry Conference; supervised student projects for community nonprofit organizations; and served as education chair for the 7th District American Advertising Federation (AAF). She received the Silver Medal Award, the highest honor from the local AAF chapter.
In December, Carrie was presented the Fide et Amore award, Milligan’s highest acknowledgement of service, for her loving and faithful work at the college. Carrie found that her greatest joy was to see her students excel.
Carrie also enjoyed riding her bicycle and Honda motorcycle, roller skating, travel (especially cruises), painting, and making jewelry. Since second grade, she had a lifelong love for pug dogs, too.
Carrie was preceded in death by her parents, her uncle Wright and aunt Bernice Swanay, and her cousin Amy Fortune. She is survived by cousins Bill Swanay; Russ Swanay; Jo Ann Swanay; Bob Swanay (Donna) and daughter Susan; Butch Fortune (Susan), daughter Llyndell, and son Rob; aunt Bettye Brumit; and several other cousins; long-time companion Steve Andrews; BFF Alice Anthony; special friend Lindsey Campbell; and her beloved pugs, Ellie, B and Millie.
The Swanay family will gather to greet and share memories Sunday July 28, 2019 at Tetrick Funeral Services in Johnson City from 4pm-7pm with a Funeral Service to follow at 7pm, Rev. Gerald Casson will be officiating the service. A Graveside Service will be conducted Monday July 29, 2019 at Happy Valley Memorial Park, family and friends will serve as pall bearers. Everyone who wishes to attend the Graveside Service is asked to meet at the cemetery by 10:50am.
The family expresses special thanks to Amedisys Home Health; Vanessa Fletcher, RN; Visiting Angels; and special friends Carolyn Carter, Mavis Onks, and Matt Onks.
Tetrick Funeral Services of Johnson City is serving the Swanay family. In lieu of flowers, memorial contributions may be sent to Milligan College, P.O. Box 750, Milligan College, TN 37682.