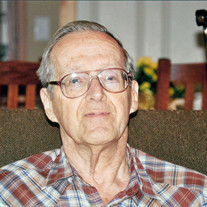 Mr. Dana Harold Justice, age 86, of Johnson City, passed away on Friday, July 6, 2018, at his home. He was a son of the late Charles and Selma Ruth Pierce Justice and was born in Butler, TN. In addition to his parents, he was preceded in death by a brother, Curtis Justice. Mr. Justice was a twelve year veteran of the Tennessee Army National Guard and a member of the Cherokee Church of Christ.

A service to honor the life of Mr. Justice will be conducted on Monday, July 9th, 2018, at 7:00 PM in the Tetrick Funeral Home, Chapel of Peace, Elizabethton with Mr. David Irick and Mr. Tony Hoss, ministers, officiating. The family will receive friends in the funeral home chapel from 5:00 – 7:00 PM on Monday prior to the service, or at the home at other times.

The graveside service and interment will be conducted on Tuesday, July 10, 2018, at 11:00 AM in Happy Valley Memorial Park. Active pallbearers will be Eric Shupe, Danny Brown, Jerry Whitehead, Garry Vanzant, Daniel Radle, Ethan Gilbert, Larry Whitehead and Tim Davenport. Those wishing to attend are invited to meet the family at the funeral home at 10:15 AM on Tuesday to go in procession to the cemetery.

Those who prefer memorials in lieu of flowers make may donations to the High Rock Bible Camp, P. O. Box 1454, Elizabethton, TN 37644.

The family would like to express a special thank you to Amedisys Hospice to for the love and care shown to Mr. Justice and the family.