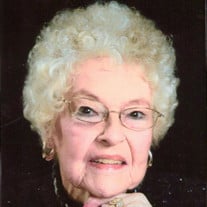 Edna Tidwell Mann, age 93, of Elizabethton, Tennessee went home to be with her Lord and Savior on Sunday, October 16, 2022 at the Sycamore Shoals Hospital in Elizabethton. Edna was born in Carter County, Tennessee on November 2, 1928, a daughter of the late Vegie and Thelma Inez (Collins) Tidwell. In addition to her parents, Edna was also preceded in death by her beloved husband, William E. “Jack” Mann; and two brothers, Hyman (Pansy) Tidwell and James Ollie Tidwell.

Edna retired from Univac and was a lifelong member of Stoney Creek Baptist Church. She was also a member of Grace Baptist Church in Elizabethton and a member of the Eastern Star Sycamore Chapter #163. Edna enjoyed cross stitching, gardening in her flowers and making flower arrangements from her flowers, reading and spending time with her three granddogs.

Those left to cherish and remember Edna include two daughters, Sherry (Conn) Nave of Elizabethton, TN and Tracie A Mann of Johnson City, TN; her sister, Inez Duren of Atlanta, Georgia and several nieces and nephews and her church families.

An open visitation will be conducted from 12:00 PM until 6:00 PM on Thursday, October 20, 2022 in the Chapel of Tetrick Funeral Home of Elizabethton for friends to sign the register book and pay their condolences.

The committal and entombment service for Edna will be conducted at 1:00 PM on Friday, October 21, 2022 in the Mausoleum of Peace at Happy Valley Memorial Park with Dr. Kenneth Jordan, officiating. Active pallbearers will be David Rock, Brady Williams, Dean Grindstaff, Rodney Campbell, Steve Mullins, and Steve Kaylor. Her church family will serve as honorary pallbearers. Those wishing to attend the committal and entombment are asked to meet at Tetrick Funeral Home of Elizabethton at 12:15 PM on Friday to go in procession to the cemetery.

The family wishes to thank Lorie Burelson, Shannon Bannon, Betty Ford and Bethany Turbyfill for their love and care shown to Edna and her family during her illness.

Words of love and sympathy may be sent to the Mann family through the funeral home website, www.tetrickfuneralhome.com. Tetrick Funeral Home-Riverside Chapel-Elizabethton, (423) 542-2232, is honored to serve the family of Mrs. Edna Tidwell Mann.