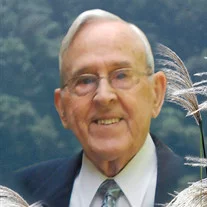 Edward Byrdean Tolliver age 92, of Johnson City, TN went to be with his Lord and to be re-united with his loving wife Arizona on Monday, September 24, 2018 from Johnson City Medical Center.Born in Benham, KY, E.B. Tolliver was the son of the late Harmon Burdine Tolliver and Minnie Leona Tolliver. Mr. Tolliver was a kind, loving, and gentle man whose life centered on his church, family, and God. He worked as a business executive for General Shale Brick for 33 years, Sioux City Brick and Tile, Gardner Paint Services, and also served in the United States Navy during WWII. Mr. Tolliver was a long time member of Mountain View Baptist Church where he served as a deacon and taught Sunday school until the age of 89. He was a Bible scholar, loved to bake bread, and was known to always carry a big smile. In addition to his parents, he was preceded in death by his loving wife, Arizona Bare Tolliver and brother, Clayton Berdell Tolliver. Those left to cherish his memory include two sons: David Tolliver and wife Judy of Maryville TN, Johnny Tolliver and wife Janey of Knoxville TN; a daughter, Lee Ann Adkins and husband Jeff of Abingdon VA; grandchildren: Mark Tolliver and wife Katy of Winston-Salem NC, Karen Wade and husband Brandon of Maryville TN, Kevin Tolliver and fiancé Elizabeth McPherson of New York City, Chelsea Tolliver of Knoxville TN, Rebekah Ison and husband Brandon of Abingdon VA, Andrew Adkins and Wife Dezarah of Norton VA; three great grandchildren: Julian Tolliver of Winston-Salem NC, Caroline Harper and Charlotte Arizona Wade of Maryville TN. A service to honor the life of E.B. will be conducted at 7:00 P.M. Friday, September 28, 2018 in the Sunrise Chapel of Tetrick Funeral Services with Reverend James Cambron officiating. The family will receive friends at the funeral home from 5:00 – 7:00 P.M. Friday prior to the funeral service. Graveside service and interment will be conducted at 10:30 A.M. Saturday September 29, 2018 in Happy Valley Memorial Park. Military honors will be accorded by the Carter County Honor Guard. Everyone will meet at the cemetery by 10:20 A.M Saturday prior to the service. The family would like to express a special thank you to David and Susie Williams for their care and support of Mr. Tolliver and to his team of caregivers who cared for him at home. Those who prefer memorials in lieu of flowers may make donations to Mountain View Baptist Church, 4005 Bristol Highway, Johnson City, TN 37601. Online condolences may be sent to the family and viewed by visiting our website at www.tetrickfuneralhome.com. Tetrick Funeral Services is honored to serve the Tolliver family. Office: (423) 610-7171