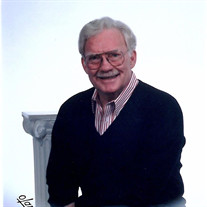 Ed Langley passed away on Thursday, May 10, 2018 in Kingsport, TN. Ed graduated from the University of Nebraska College of Law with honors and served as Chairman of the Appellate Competition Council. He retired as a Lt. Colonial from the U.S. Air Force and was a distinguished Officer Graduate in Pilot Training. Ed was an instructor pilot with the Air National Guard for 20 years.

Ed was the co-drafter of the NE Sales and Income Tax Law, contributed many articles for the American Bar Association in Nebraska, lectured on estate planning for the State of Nebraska and a panel member of the NE Bar Association contributing legal aide. He was admitted to the U.S. Supreme Court, U.S. Federal Court, District Court in IA and NE, U.S. Tax Court, and State Courts of NE and IA.

He had a love for music, photography, golf, tennis, squash, racquetball, hunting and fishing, and bible study. Ed played high school and college football in Nebraska. Ed was a member of Colonial Heights Christian Church, where he served communion and worked in the food pantry prior to his illness.

He was preceded in death by his parents, Madge and Floyd Langley; and brother, Donald Langley.

A private family service will be held at Happy Valley Memorial Park.

In lieu of flowers, memorial contributions can be made to the food pantry of Colonial Heights Christian Church, 105 Meadow Lane, Kingsport, TN 37663.

The family would like to thank his personal caregivers whom he loved dearly, Teresa Phelps and Jackie Reeves of Suncrest Hospice Care.