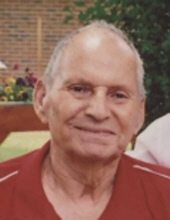 Eugene “Buck” Legg, 88 of Telford, passed-away on Thursday, July 16, 2020 at Four Oaks Health Care and Nursing Home. He was a native of Parrottsville, son of the late Ralph and Mary McMillan Legg.

Buck was owner and operator of West Side Radiator Shop for many years. He was a member of Second Baptist Church of Jonesborough and a member of Gray Masonic Lodge F&AM. His hobbies included NASCAR and his dune buggy.

In addition to his parents, his brother, Joe Legg, his sister, Annie Rogers and his son-in-law, Tony Clark preceded him in death.

A graveside service will be conducted on Sunday, July 19, 2020 at 3:00 pm at Happy Valley Memorial Park under the direction of Rev. Junior Burchell.
Buck will lie in state at Morris-Baker Funeral Home from 12:00 pm until 2:00 pm. Family and friends are asked to assemble at the cemetery at 2:50 pm.