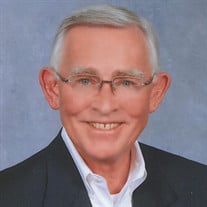 Gene Sams, age 83, of Elizabethton, TN passed away Sunday, July 17, 2022 at Hillview Health and Rehabilitation Center. He was the son of Elmer B. Sams, Sr. and Pearl Humphrey Sams.

He was a 1956 graduate of Elizabethton High School and 1960 graduate of East Tennessee State University with a Bachelors in Business Administration. Gene served in the U.S. Army and owned and operated a State Farm Insurance agency for 49 years. He was a lifelong member of Calvary Baptist Church where he served as a Deacon, Sunday School Teacher and his favorite activity singing in the choir for 60 years.

Gene was a former President of Jaycees and United Way. He also served on the boards of Elizabethton Electric and Elizabethton Housing Authority, Boys and Girls Club of Carter County and Friends of Sycamore Shoals.

In retirement, Gene worked as a volunteer at Hale Community Ministries. He enjoyed fishing, spending time with friends and family and attending any sporting event possible with his best friend, Larry Treadway.

In addition to his parents, he was preceded in death by his brother, Terry Sams and son, Stacy Sams.

A service to celebrate the life of Gene Sams will be conducted at 7:00 PM on Thursday, July 21, 2022 in the Chapel of Peace of Tetrick Funeral Home, Elizabethton with Dr. Joe Sorah and Dr. Kenneth Jordan officiating. Music will be under the direction of Calvary Men’s Ensemble. The family will receive friends between the hours of 5:00 PM until 7:00 PM prior to the service on Thursday.

The graveside service and committal will be held at 11:00 AM on Friday, July 22, 2022 at Happy Valley Memorial Park with Pastor Chris Hughes officiating. Pallbearers are Patrick Sams, Alex Sams, Keaton Davis, Brad Sams, Chad Sams, Kent Young and Andy Arnold. Honorary pallbearers will be Men’s Sunday School class of Calvary Baptist Church, Larry Treadway, Johnny Treadway, Joe Culver, Ken Wandell, Fritz Jones and Jay Wheeler. Those who wish to attend the graveside service are asked to meet at the cemetery at 10:45 AM on Friday.

A special thanks to Sycamore Springs Senior Living and Hillview Health Care Rehabilitation Center for all their loving care and support during this difficult time.

Those who prefer memorials in lieu of flowers may make donations to Calvary Baptist Church, 225 Holly Ln, Elizabethton, TN 37643.

Words of comfort can be sent to the family through our website, www.tetrickfuneralhome.com. Tetrick Funeral Home-Riverside Chapel, 211 North Riverside, Elizabethton, TN 37643 (423) 542-2232 is honored to serve the family of Gene Sams.