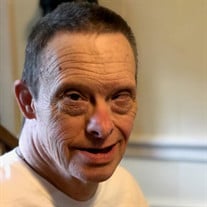 After living a joyful 66 years, George Vining, of Jonesborough (formerly of Elizabethton) went home to be with his Jesus on Tuesday, September 27, 2022 from Johnson City Medical Center. George was born in Lake Charles, Louisiana to the late George Joseph Vining, Sr. and Joye Doster Vining Shook. In addition to his parents, he was preceded in death by death by his second father, Ogden Shook; a brother, Joe Shook; a sister, Becky Shook; a special aunt, Sarah M. Shook; a nephew, Jason Bowers; and grandparents, uncles, aunts, and cousins have also preceded him.

George had a smile that was infectious, and a twinkle in his eyes that lit up every room. He enjoyed being around people, and he loved with his whole heart. George accepted Jesus into his heart at a young age at First Baptist Church, Elizabethton, and there was never any doubt of his firm belief in his salvation. George attended the Dawn of Hope for many years. He was a Special Olympics gold medalist, and he was a life-long avid swimmer and bowler. George loved to listen to Johnny Cash and he was a Batman fan from the very beginning of the original TV series. Since 1960, George was a true Cyclone and Tennessee Volunteer.

A graveside to celebrate the life of George Vining will be conducted at 11:00 AM on Thursday, September 29, 2022 at Happy Valley Memorial Park with Todd Hallman officiating. Honorary pallbearers will be the staff and caregivers of Enhanced Support Services. Those wishing to attend the service are asked to meet at the cemetery at 10:50 Am on Thursday.

Words of sympathy may be shared with the Vining family on our website, www.tetrickfuneralhome.com. Tetrick Funeral Home, Elizabethton (Office 423-542-2232, service information line, 423-543-4917) are privileged and honored to serve the family of George Vining.