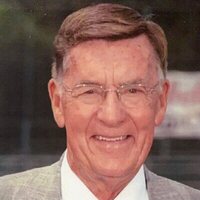 Trust in the Lord with all thine heart; and lean not unto thine own understanding. In all thy ways acknowledge him, and he shall direct thy paths. Proverbs 3: 5&6

Pastor Harold Mains 82, of Elizabethton TN., went to be with the Lord after a long fight with prostate cancer on Monday, February 8, 2021 at his residence surrounded by his family. He was the son of the late Glen Mains and Virginia Perkins. In addition to his parents, he was preceded in death by grandparents, Mr. and Mrs. Henry Younce, Grandmother Callie Mains, brothers Henry Mains, and Ron Perkins.

Reverend Mains was a pastor for sixty years. He was a graduate of Elizabethton High School and Northeastern Bible College in Essex Falls, New Jersey where he served as Dean of Men and Athletic Director. Pastor Mains served as a missionary to the Children’s Bible Mission before pastoring several churches in NC, SC, and TN, which included, Faulks Baptist, Cooley Springs Baptist, Lee Park Baptist, Centerville Baptist, Fairview Baptist, Big Springs Baptist, Philadelphia, and Crosspointe Fellowship.

The family would like to express their sincere gratitude to Crosspointe Fellowship Church, Dr. Breemer, Dr. Beard, and Amedisys Hospice Team along with Pastors of the Watauga Association, J.A. Stalcup Jr. and Memorial Funeral Home, special friend Angie Wilhoit, and many others that cared so deeply for Pastor Mains.

In lieu of flowers the family has asked that memorials be sent to Crosspointe Fellowship Church, 206 Parkway BLVD. Elizabethton, TN 37643. Due to the Covid-19 pandemic, everyone is required to wear a mask and practice social distancing. Condolences may be sent to the family at our website www.memorialfcelizabethton.com.