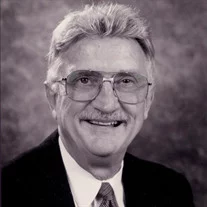 Dr. Harold Lane, age 84, of Elizabethton, TN passed away Friday, June 14, 2019 in Sycamore Shoals Hospital. He was a native of Williamsburg, KY and was the son of the late Claude Lane and Dorothy Lane Ross. Dr. Lane retired in December, 2011 after fifty years serving Elizabethton as a dentist. He was always known to say that he was a “mouth mechanic”. He was a member of First Baptist Church Elizabethton for fifty-seven years where he served as a Sunday School teacher and an usher. Dr. Lane had also been a member of the Elizabethton Kiwanis Club for fifty-seven years, he was a member and past president of Southeastern Academy of General Dentistry, was a 32nd Degree Mason of Dashiell Masonic Lodge 238 F & AM, was a member and past state president of the Elizabethton Elks Lodge #1847 and was a Grand Lodge officer of the Elks. He served in the U.S. Army from 1953 – 1956 in the Korean Conflict. Dr. Lane loved Monday’s because he loved to go to work. He enjoyed working in his rhododendron, spending time on the houseboat on Watauga Lake and loved his four legged children, Precious and Molly.

In addition to his parents, he was preceded in death by a brother, Stoney Lane and a sister, Claudia McNeeley. Those left to cherish his memory include his wife of fifty-eight years, Barbara P. Lane, of the home; two daughters, Claudia Montgomery and husband Mark, Colonial Heights and Monica Hollifield and husband Chris, Elizabethton; three grandchildren, Justin Cooter, Washington, DC, Taylor Leichliter and husband Jonathan, Gray, TN and Kaylee Hollifield, Elizabethton and one-great-grandson, Mason Leichliter, Gray, TN.

A service to honor the life of Dr. Harold Lane will be conducted at 7:00 P.M. Wednesday, June 19, 2019 in the Chapel of Peace of Tetrick Funeral Home, Elizabethton with Minister John Bunn and Rev. Todd Hallman officiating. Music will be under the direction of Debbie Gouge. The family will receive friends at the funeral home from 5:00 – 7:00 P.M. on Wednesday prior to the service or at the residence at any time.

Those who prefer memorials in lieu of flowers may make donations to the Elizabethton Animal Shelter, 253 Sycamore Shoals Road, Elizabethton, TN 37643. Online condolences may be shared with the family on our website at www.tetrickfuneralhome.com. The Lane family is in the care of Tetrick Funeral Home, Elizabethton. Office: (423) 542-2232, service information line: (423) 543-4917.