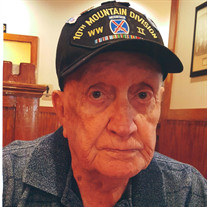 Jack Alvin Buck, age 94, went home to meet his Lord and Savior on Thursday May 17, 2018, passing at home following a brief illness. He was a lifelong resident of the Elizabethton area. Jack was the son of the late M.B. and Osa Redmond Buck. He was preceded in death by his beloved wife, Nancy Slagle Buck, in 2015; brother, David Blaine Buck and sisters, Ann Buckles and Kathryn Lacy. Jack and Nancy Buck were members of First Christian Church Elizabethton where Jack previously served as Sunday School Treasurer and Nancy taught Sunday School for over 40 years.

Jack was graduate of Happy Valley High School where he enjoyed and lettered in football and basketball. He was a starting quarterback on the football team. Jack enjoyed playing sports and watching the Tennessee Volunteers while coaching from the stands. He was proud to serve his country in the 10th Mountain Division of the United States Army in World War II, stationed in Italy. After the war ended, Jack returned home and enrolled in East Tennessee State University and graduated with a degree in business. After college graduation, Jack was employed at North American Rayon Corporation. His career followed at Nuclear Fuels as an accountability officer and supervisor for several departments until his retirement.

One of Jack’s special talents was to spin a big tale while he enjoyed other’s reaction to it. Hunting and fishing are the Buck family’s passion. Jack’s father taught him to hunt and fish as a child. He shared this enthusiasm and his skills with his sons throughout the years. The family enjoyed annual trips to South Dakota for pheasant hunts. When Jack was 92 years old he shot his last deer and recently went fishing at his favorite spot on the Doe River. Jack wrote memoirs of his sports, hunting, fishing and military experiences.

Those left to cherish Jack’s memory include: two sons, Jack Buck and his wife Amy, of Florida; Mike Buck of Johnson City; Jack and Amy’s two daughters, Brandy Roberts and her husband, Matt; Beckey Greene and her husband, Daniel; great-grandsons, Will and Andrew Roberts and Mike’s son and daughter-in-law, Justin and Mandy Buck. Jack also leaves behind daughter-in-law, Julie Buck; a niece, Teresa Young and her husband, Philip; several other nieces and nephews; several cousins and his special friends, Pat Szabo and family and Becky Harold.

A service to honor the life of Jack Alvin Buck will be conducted at 1:00 P.M. Monday, May 21, 2018 in the Sunset Chapel of Hathaway-Percy Funeral and Cremation Services with Mr. Michael Klaus, minister officiating. The family will receive friends at the funeral home from 11:00 AM – 1:00 PM on Monday prior to the service. Committal and entombment will follow the funeral service on Monday at Happy Valley Memorial Park, Mausoleum of Peace. Active pallbearers will be selected from family and friends. Military honors will be accorded by the Carter County Honor Guard.