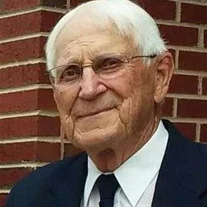 Mr. James A. Maupin, age 97, of Elizabethton, TN passed away Thursday, May 23, 2019 in Sycamore Shoals Hospital. A native of Johnson City, he was the son of the late George Hugh Maupin and Mattie Mae Nidiffer Maupin. James graduated from Elizabethton High School and was a member of the 1938 E.H.S. state championship football team. He retired from the Maytag Company and attended Elizabethton Church of Christ. He was a U.S. Air Force veteran having served in World War II where he was a PT Instructor. James was an avid, serious golfer and enjoyed sports.

In addition to his parents, he was preceded in death by his first wife, Betty Lou Riley Maupin; five brothers and four sisters with James being the last surviving sibling. Those left to cherish his memory include his wife, Betty Jean Whitson Maupin, of the home; a daughter, Judy Kaye Maupin Stoffle and husband William, New Orleans, LA; step-daughters, Joan Fair, Vickie Lynn Russell, Debra Reece and husband Dwight and Patty Pierce, all of Elizabethton; two grandchildren, Kari Stoffle and Lori Stoffle; ten step-grandchildren; several step-great-grandchildren and a special niece, Diane Roberts and husband Steve, Watauga. Several other nieces and nephews also survive.

A service to honor the life of Mr. James A. Maupin will be conducted at 3:00 P.M. Sunday, May 26, 2019 in the Elizabethton Church of Christ with Mr. Roby Ellis, minister officiating. The family will receive friends at the Church from 1:30 – 3:00 P.M. on Sunday prior to the service or at the residence at any time.