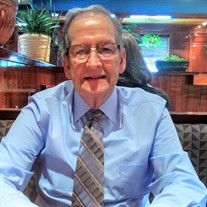 Mr. James M. “Jim” Vaughn, Sr., age 75, of Elizabethton, passed away unexpectedly on Sunday, August 19, 2018, at his home. He was a son of the late Melvin Marshall Vaughn and Laura Walker Vaughn and was born in Carter County. In addition to his parents, he was preceded in death by his sister, Lois Smith and a great-grandson, Timothy James Vaughn.

Mr. Vaughn was a veteran of the United States Navy. He was retired from Wellmont Health System, and was an active member of Elizabethton Alliance Church where he had served the church as an Elder. He loved to garden, go fishing and spend time with his family. He was a loving husband, father, grandfather and great-grandfather and will be greatly missed.

A service to honor the life of Mr. Vaughn will be conducted on Wednesday, August 22, 2018, at 7:00 PM in the Tetrick Funeral Home, Chapel of Peace, Elizabethton with Pastor Louis O’Bourke officiating. The eulogy will be delivered by his son, James Vaughn, II. The family will receive friends in the funeral home chapel from 5:00 – 7:00 PM on Wednesday prior to the service, or at the home at other times.

The graveside service and interment will be conducted on Thursday, August 23, 2018, at 2:00 PM at Happy Valley Memorial Park. Active pallbearers will be selected from family and friends. Those wishing to attend are asked to meet the family at the cemetery at 1:45 PM on Thursday.