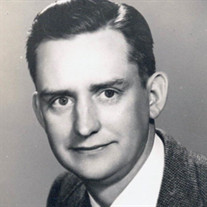 James O. Counts, age 97, of Elizabethton, passed away on Sunday, January 28, 2018 at Sycamore Springs Senior Living Community, following a brief illness. James was born in Haysi, Virginia to the late Grady and Dixie Hay Counts. In addition to his parents, he was preceded in death by his wife, Wilma Mullins Counts; a brother, Claude Counts; and one sister, Bonnie Hamm.

James retired as a state education consultant and was a United States Army veteran, having served in World War II for five years. He graduated class valedictorian of Haysi High School, then pursued his education at East Tennessee State University, where he earned his Master’s Degree in education. He was a member of Borderview Christian Church for 35 years, where he had served as a Deacon, an Elder and as an adult Sunday School teacher, although he had attended Elizabethton Church of Christ for the past 2 years. He was a member of the Dashiell Masonic Lodge #238 F&AM, served as a Jericho Temple Shriner, Scottish Rite Mason, and a York Rite Mason. James loved to garden.

A service to honor the life of James O. Counts will be conducted at 2:00 PM on Thursday, February 1, 2018 in the Riverside Chapel of Tetrick Funeral Home, Elizabethton with Mr. Scott Fisher and Mr. Roby Ellis, ministers, officiating. Music will be under the direction of Scott Reynolds and Ray Don Markland. The family will receive friends from 12:30 PM until 2:00 PM in the funeral home chapel, prior to the service on Thursday.

The graveside service will follow at Happy Valley Memorial Park. Military honors will be accorded by the Carter County Honor Guard. Active pallbearers will be selected from family and friends.

The family would like to especially thank the staff of Sycamore Springs Assisted Living and to Amedisys Hospice for the loving care given to James during his illness.

Those who prefer memorials in lieu of flowers, may make donations to Borderview Christian Church, 1338 Bristol Highway, Elizabethton, TN 37643.

Online condolences may be shared with the family on our website,www.tetrickfuneralhome.com.
Mr. Counts and his family are in the care of Tetrick Funeral Home, Elizabethton, office 423-542-2232, service information and obituary line, 423-543-4917.