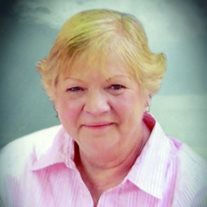 Judy A. Umerley, age 65, of Elizabethton, passed away Saturday August 16, 2014 at her residence. Judy was a native of Carter County and was the daughter of the late Edwin Perry and Etta S. Winters McCourt. In addition to her parents, she was preceded in death by her husband, Raymond Umerley; and a son, Dale Allen Chapman. She was a homemaker and a recent graduate of the Tennessee College of Applied Technology in Elizabethton and was pursuing a new career in Dietary Management.

A service to honor the life of Ms. Judy A. Umerley will be conducted at 2:00 PM on Wednesday, August 20, 2014 in the Chapel of Peace, Tetrick Funeral Home, Elizabethton with Rev. Raymond W. Amos, Sr. officiating. The family will receive friends from 1:00 PM- 2:00 PM in the funeral home chapel, prior to the service on Wednesday. Interment will follow at Happy Valley Memorial Park.

Those who prefer memorials in lieu of flowers may make donations to the American Diabetes Association, 211 Center Park Drive, #3010, Knoxville, Tennessee, 37922.