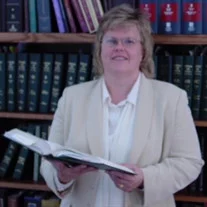 Kathryn Jane Dugger-Edwards, age 58, of Elizabethton, passed away on Thursday, September 14, 2018 at the Johnson City Medical Center, following a brief illness. Kathryn was born in Johnson City, Tennessee to Jane Hensley Dugger, of Elizabethton and the late George Dugger, Jr. In addition to her father, she was preceded in death by her previous husband, John Mack; her paternal grandparents, Mr. and Mrs. George F. Dugger Sr.; and her maternal grandparents, Mr. and Mrs. Opie Hensley; and two cousins, Mike Fouts and Brenda Dugger.

Kathy was a loving daughter and was dedicated to her family and to her profession. She was a member of First United Methodist Church and a 1978 graduate of Elizabethton High School, where she was a member of the first women’s basketball team. Kathy lived in Elizabethton with her husband Keith. During her spare time, Kathy enjoyed working in her garden, water aerobics, and riding her bicycle on the Tweetise Trail.

Kathy graduated from ETSU in 1982 and from Memphis University in 1986. She was admitted to the Tennessee Bar Association in 1988 and to the United States District Court for Eastern District of Tennessee in 1990.

After working as a secretary at Dugger and Cole Attorneys at Law, Kathy decided that she could do just as a good a job herself and enrolled in law school at Memphis University. While at Memphis, Kathy was awarded the American Jurisprudence Award for contracts and nominated for Who’s Who among American Law Students.

Those left to cherish her memory include her husband, Keith Edwards, of the home; her mother, Jane Dugger, of Elizabethton; one brother, Mark Dugger and wife Vickie, of Elizabethton; one uncle, Jerry Hensley and wife Betty, of Johnson City; her cousins, Jerrie Sue Bowers and husband Jim Schweitzer, of Jonesborough, Tommy Fouts, of Elizabethton, the Honorable John F. Dugger, Jr. and wife Jean Ann, of Morristown, and Rebecca Griffin and husband Jim, of Charlotte, NC; a god child, Joyce Shanks, of Banner Elk, NC; and her nephews, Brett Baurle and wife Mary and their daughters, Zoe and Macy, all of Elizabethton and Dr. Eric Baurle and wife Sarah and their two children, Everett and Charlotte, all of Brentwood, TN. Numerous special friends also survive.

A service to honor and celebrate the life of Kathryn Jane Dugger-Edwards will be conducted at 4:00 PM on Sunday, September 16, 2018 at First United Methodist Church of Elizabethton with Reverend Raymond Amos, Sr., officiating. The family will receive friends from 2:00 PM until 4:00 PM at the church, prior to the service on Sunday.

The graveside service will be conducted at 1:00 PM on Monday, September 17, 2018 at Happy Valley Memorial Park. Active pallbearers will be Tommy Fouts, Brett Baurle, Jeff Miller, Adam Shanks, Brady Williams and Bill Hampton. Honorary pallbearers will be Ted Fields, Mike Lingerfelt, Bo Campbell, Eddie Hoover, Ed Dance and Jimmy Ensor. Those wishing to attend the service are asked to meet at Tetrick Funeral Home, Elizabethton at 12:00 PM on Monday, to go in procession.

The family would like to express a special thank you to Dr. J. DeShankar and his staff and the doctors and staff of the 4th floor at the Johnson City Medical Center.

Online condolences may be shared with the family on our website, www.tetrickfuneralhome.com
Mrs. Dugger-Edwards and her family are in the care of Tetrick Funeral Home, Elizabethton. Office 423-542-2232, service information line, 423-543-4917.