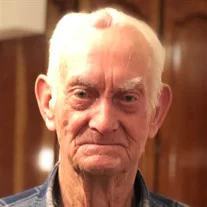 Lee Whitehead, age 83, of Elizabethton joined his beloved wife in eternal life on Thursday, July 11, 2019 while holding his beloved granddaughter’s hand at Bristol Regional Medical Center. Lee was born in Hampton, Tennessee to the late John Whitehead and Bessie Townsend Whitehead. In addition to his parents, he was preceded in death by his loving and devoted wife of fifty-nine years, Peggy Lorraine Guinn Whitehead on March 13, 2018; his brothers, Ernest Whitehead, Mack Whitehead, Bynom Whitehead, Stewart Whitehead and Sam Whitehead; his sister, Christine Rainbolt; his brothers-in-law, Bob Guinn, Carl Guinn and Dean Guinn; and one sister-in-law, Pauline Keller.

Lee was a dedicated husband, father, grandfather, brother and friend. He was known as a compassionate and caring man with a heart as big as the outdoors. Lee was a member of Beck Mountain Baptist church and enjoyed woodworking, music and most of all spending time with his beloved grandchildren and his family. He will be very missed by all that had the pleasure of knowing Lee.

A service to honor and celebrate the life of Lee Whitehead will be conducted at 7:00 PM on Sunday, July 14, 2019 in the Chapel of Peace at Tetrick Funeral Home, Elizabethton with Pastor Ronnie Campbell and Pastor Terry Richardson, officiating. The family will receive friends from 4:00 PM until 7:00 PM in the funeral home chapel, prior to the service on Sunday, or at the residence at any time.

The family would like to especially thank Chuck and Lorie Walden for the tremendous love shown to Lee.

Those who prefer memorials in lieu of flowers, may make donations to the charity of their choice or to the Barter Youth Academy, 127 W. Main Street, Abingdon, VA 24210, in loving memory of Lee.

Online condolences may be shared with the family on our website atwww.tetrickfuneralhome.com. Lee and his family are in the care of Tetrick Funeral Home, Elizabethton. Office: (423) 542-2232, service information line: (423) 543-4917.