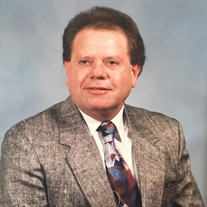 Dr. Lonnie L. Jackson, of Johnson City, TN, went home to be with his Lord and Savior on Monday, January 15, 2018. He was born March 3, 1938, in Washington County, TN, to the late Robert Lee and Edith Irene (Cantrell) Jackson.

After graduating from Jonesborough High School in 1957, Lonnie served four years (1957-1961) in the U.S. Navy, assigned to various Naval Bases, and aboard the Destroyer USS Massey (DD-778). He was deployed with the U.S. 6th Fleet and forces from NATO, active in the Caribbean and Mediterranean. He was honored with the National Defense Medal and the Good Conduct Medal.

After his service, Lonnie worked as a Civilian Defense Contractor for the Raytheon Corporation.

Lonnie attended Palmer College of Chiropractic, earning his Doctor of Chiropractic Degree in 1974. He was the first in his family to graduate from college.

Lonnie returned home to East Tennessee, where he served his community with chiropractic care over 40 years (1974-2016). He truly cared for his patients, treating and healing thousands, and leaving a legacy as a kind-hearted and dedicated mentor and friend. Lonnie did not let his loss of sight keep him from serving his patients, but persevered through every challenge as a shining example of how one may overcome adversity to follow their passion and help others find success. In 2013, he received the Tennessee Chiropractic Association’s Keith D. Bailey Chiropractic Service Award for his dedicated mentorship of field doctors and students to help them achieve their full potential in service to the community. He served in the TCA Eagle Society, working with legislators on Chiropractic issues, and supporting fellow Chiropractors across Tennessee.
Survivors include his wife, Brenda (Greene) Jackson; son Rick Taylor (Kim) of Richmond, VA; daughter Lisa Torbett (Tommy) of Johnson City, TN; grandchildren, Staff Sergeant Weston Taylor (Ronni), Chloe Lyons, Amanda Taylor, and Ellie Lyons; great-granddaughter Bettie Rae Taylor; two brothers, Melvin and Randy Jackson, and two sisters, Dorothy Shell and Trishia Snowden.

The family would like to extend a special “Thank You” to the staff of the Community Living Center, and Drs. May and Aninyei.