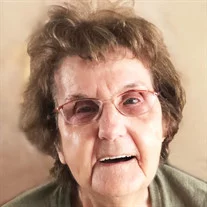 Mattie E. Lambert Lewis, age 92, of Butler, Tennessee went home to be with the Lord on Tuesday, May 07, 2019 from the Johnson City Medical Center. Mattie was born in Poga, Tennessee to the late Hobert Charles and Etta Vines Lambert. In addition to her parents, she was preceded in death by her husband of 53 years, Charles “Ray” Lewis on December 3, 2003; a brother, Allen Lambert; and a sister, Mae Lambert Harmon.

Mattie was a loving wife, mother, grandmother and great grandmother and was a member of Elizabethton Church of Christ. She enjoyed quilting, fishing, listening to music and also playing music.

A visitation will be conducted from 5:00 PM until 7:00 PM on Friday, May 10, 2019 in the Chapel of Peace at Tetrick Funeral Home, Elizabethton or at the residence of her daughter, at any time.

A service to honor the life of Mattie E. Lambert Lewis will be conducted at 10:30 AM on Saturday, May 11, 2019 in the Chapel of Peace at Tetrick Funeral Home, Elizabethton with Mr. Roby Ellis and Mr. Eddy Craft, officiating. Music will be under the direction of Elizabethton Church of Christ Singers.

Those who prefer memorials in lieu of flowers, may make donations to Elizabethton Church of Christ, 137 East C. Street, Elizabethton, TN 37643.

Online condolences may be shared with the family on our website, www.tetrickfuneralhome.com
Mattie and her family are in the care of Tetrick Funeral Home, Elizabethton. Office 423-542-2232, service information line, 423-543-4917.