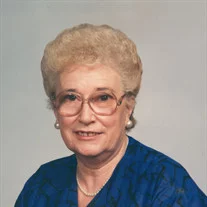 Maxine Bowling Birchfield, age 89, of Elizabethton, passed away on Saturday, May 25, 2019 at the Ivy Hall Nursing Home. A native of Harlan, Kentucky, she was the daughter of the late Edward and Viola Douglas Bowling. In addition to her parents, she was preceded in death by her husband, Billy L. Birchfield; a sister, Margaret Catolla; brothers, James Bowling and Henry Bowling; and a grandson, Blair Birchfield.

Maxine was a faithful member of Pleasant Beach Baptist Church where she joined on September 6, 1970. She was a former Sunday school teacher, nursery worker and enjoyed singing in the choir. Maxine loved gardening, cooking, canning, traveling, sightseeing and fishing; but her ultimate joy came in spending time with her family, especially her grandchildren and great-grandchildren.

A service to honor the life of Maxine Bowling Birchfield will be conducted at 11:30 am on Wednesday, May 29, 2019 at Tetrick Funeral Home, Elizabethton, with Pastor Mark Fowler and Pastor Bobby Stout officiating. The family will receive friends on Wednesday from 10:00 – 11:30 am prior to the service in the chapel.