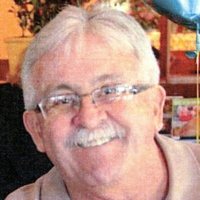 Richard Allen Lewis, 65, of Elizabethton, TN, passed away Wednesday, October 30, 2019 at the Johnson City Medical Center, after a courageous battle with numerous health problems. Rick was born March 22, 1954 to the late Freeman and Marie Kemp Lewis. He was an avid golfer, fisherman and Antique Car enthusiast. He was a member of Little Doe Freewill Baptist Church.

In addition to his parents, he was preceded in death by his “second mom” Sallie Guy.

Rick is survived by his loving and faithful wife of 47 years Felecia Lewis, his two daughters : Tanya Lewis and Tracy Shepard her husband Chris Shepard, and his grandson and best friend Chase Shepard, his sister and brother-in-law Linda & Ken Land, his brother and sister-in-law Gregory “Buzz” and Norma Lewis. He was adored by numerous, nephews, nieces, great nephews, great nieces, cousins and extended family and friends near and far.

Rick’s family will receive friends Sunday, November 3, 2019 from 4 to 6 p.m. in Memorial Funeral Chapel with the funeral service following at 6:00 p.m. with Pastor Shane Waters, officiating. Special music provided by Little Doe Freewill Baptist Church Choir and Joel Crisp. The graveside service and interment will be held Monday, November 4, 2019 at 1:00 p.m. Pallbearers who are expected to meet at the funeral home Monday at 12:30 p.m. will be: Greg Lewis, Chris Gentry, Ashley Newland, Rick Leslie, Blake Woods, John Thurman, Danny Guy, Steven Croley, Cecil Guy and Chris Shepard. Honorary Pallbearers include: Sam Wade, Buzz Lewis, Ken Land, Scott Fillers, Tony Street, his great nephews and all the men and women from Colorworks where Richard worked for 43 years and retired on January 31, 2019. In lieu of flowers the family asks for donations to be made to the St. Judes Children’s Research Hospital, 262 Danny Thomas Place, Memphis, TN 38105. With Rick’s love of antique cars, the family would like those who wish to drive their antiques, hot rods, muscle cars, etc. to the funeral home on Sunday and also ride along to the graveside, to meet at the funeral home at 12:30 p.m. Visitors are welcome at the family residence as well as at the residence of Buzz Lewis. A special “Thank you” to all to doctors, nurses, EMTs, and other medical staff that took care of Rick over the past few years.