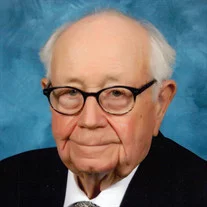 Richard “Fred” Tucker, Sr., age 92, of Hampton, passed away on Sunday, December 30, 2018 at Hillview Rehab Clinic. He was the son of the late David and Callie Tucker. In addition to his parents, he was preceded in death by his first wife, Kate Snavely; a sister, Helen Smith, two step-brothers, Hunter and Brian Tucker; and two step-sisters, Lessie and Ollie Mae.

In December 1944, Fred left high school to enlist in the Army. He served in the European Theater during World War II as an infantry rifleman in Company L, 14th Infantry, 71st Infantry Division in General Patton’s 3rd Army, landing in France and fighting across Europe. He was awarded the combat Infantry Badge, Victory Medal WWII, European Theater Ribbon with 2 Bronze Stars and Good Conduct Medals.

Fred was a 1945 graduate of Elizabethton High School where he played football in 1943-1944. He was recruited for UT on a scholarship but turned it down to attend Milligan College.

Mr. Tucker had been the District Manager for American National Insurance and was a member of the First Baptist Church of Elizabethton. He enjoyed UT football games, Elizabethton Twins baseball games, fishing, hunting and gardening.

A service to celebrate the life of Richard “Fred” Tucker, Sr. will be conducted at 7:00 PM on Wednesday, January 2, 2019 in the Chapel of Peace at Tetrick Funeral Home, Elizabethton with Pastor Todd Hallman and Rev. Tyson Garrison (step-son) officiating. Music will be provided by Jerry Barnett. The family will receive friends from 5:00 PM until 7:00 PM in the funeral home chapel, prior to the service on Wednesday.

The graveside service will be conducted at 11:00 AM on Thursday, January 3, 2019 at Happy Valley Memorial Park with military honors to be accorded by the Carter County Honor Guard. Active pallbearers will be Alvin Woodby, Terrell McClain, Jerry Barnett, Jerry Harper, Carroll Lowe, Tommy Lewis, Kermit Smith and grandsons Nathan Bradshaw and Ricky Tucker. Those wishing to attend the service are asked to meet at Tetrick Funeral Home at 10:15 AM on Thursday, to go in procession.

Those who prefer memorials in lieu of flowers, may make donations to First Baptist Church, 212 East F Street, Elizabethton, TN 37643 or to your favorite charity.
Online condolences may be shared with the family on our website, www.tetrickfuneralhome.com. Mr. Tucker and his family are in the care of Tetrick Funeral Home, Elizabethton, office 423-542-2232, service line information 423-543-4917.