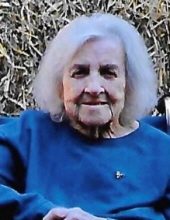 Violet Christine McCrary, 92 of Johnson City, died Thursday, December 31, 2020 at the Johnson City Medical Center. She was a native of Elizabethton, daughter of the late Marvin and Evelyn Texann Scalf Rogers.
Violet was a homemaker and collector of dolls, she also had a booth at the Bluff City Flea Market, where she was a friend to all.
Violet was a longtime member of the Downtown Christian Church.
In addition to her parents, her husband, Raymond O’Dell McCrary, Jr.; a son, Kenneth Lynn McCrary; a sister, Vivian Maxine Umbarger and her husband Ray; three brothers, Edward, Marvin “Junior” and Bobby Rogers all preceded her in death.
Those left to cherish her memory: two sons, Roger (Patricia A.) McCrary, Keith McCrary; a daughter, Patti (Rick) Ingram; nine grandchildren and 10 great grandchildren and one on the way; several nieces and nephews.
A graveside service will be conducted on Saturday, January 2, 2021 at 2:30 pm in the Happy Valley Memorial Park. Friends and family are asked to assemble at the cemetery by 2:20 pm.
In lieu of flowers memorials may be made in Violet’s memory to: The Shriner’s Hospital, 950 West Faris Road, Greeneville, SC 29605.
Memories may be shared via www.morrisbaker.com.
Morris-Baker Funeral Home and Cremation Services, 2001 E. Oakland Avenue, Johnson City, TN is serving the McCrary family. (423) 282-1521