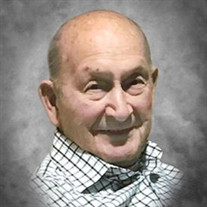 W.G. “Dub” Ward, age 90, of Elizabethton, Tennessee went home to be with the Lord on Wednesday, September 21, 2022 at the Sycamore Shoals Hospital in Elizabethton. “Dub” was born in Buladean, North Carolina on December 29, 1931 to the late Everett and Sally Butler Ward. In addition to his parents, “Dub” was also preceded in death by his first wife, Vivian Ward; and his daughter, Kimberly Ward.

Dub was very easy going and everyone loved him. He never met a stranger and made friends easily. He was a member of Sims Hill Christian Church and had served as a deacon at East Side Christian for many years. Dub was a man of great faith and love for the Lord, he loved going to church and singing in the choir every chance he got. Dub retired from Inland Container and enjoyed riding motorcycles, going to the lake, skiing and living life to the fullest! He was a United States Air Force veteran having served his country in the Korean War.

A service to celebrate and honor Dub’s life will be conducted at 7:00 PM on Monday, September 26, 2022 in the Chapel of Peace at Tetrick Funeral Home of Elizabethton with Mr. Bret Jones, minister, officiating. Music will be provided by Linda Henry and the Sims Hill Christian Church Choir. The family will receive friends from 5:30 PM until 7:00 PM in the funeral home chapel prior to service on Monday.

The graveside service will be conducted at 11:00 AM on Happy Valley Memorial Park. Honorary pallbearers will be Tom Ward, Roy Williams, Dale Gillette, Chris Morris, Rick Kyte, and Jonathan Ward. Those wishing to attend the graveside service are asked to meet at the cemetery at 10:50 AM on Tuesday.

Words of sympathy may be shared with the Ward family on our website, www.tetrickfuneralhome.com. Tetrick Funeral Home, Elizabethton (Office 423-542-2232, service information line, 423-543-4917) are privileged and honored to serve the family of W.G. “Dub” Ward.