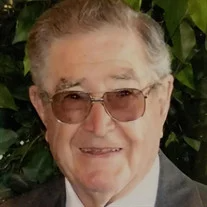 Warren G. Ollis, age 97, of Avon Park, FL went home to be with his Lord on Wednesday, February 24, 2021. He was born in Roan Mountain, TN to the late Lafayette and Burneice Julian Ollis. Warren served in the Navy and was aboard the U.S.S Nicholson from 1941 to 1946 and later was employed by G.E in Cleveland, Ohio and retired in 1982 after 27 years. After he retired he spent most of his winters in Florida. Warren was of the Christian faith and a member of Calvary Baptist Church of Linesville, PA.

A service to honor the life of Warren G. Ollis will be conducted at 12:00P.M. on Saturday, March 6, 2021 at Hathaway-Percy Funeral Home with Mr. Doug Rohrer officiating. The family will receive friends between the hours of 10:00A.M. and 12:00P.M. prior to the service.

Our staff is committed to taking care of our guests and families that we serve. Please understand we will be following the State’s COVID guidelines. We also encourage all guests and family members attending visitations and services to please bring and wear a mask.