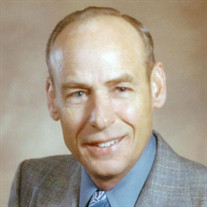 “Study to show thyself approved unto God, a workman that needeth not to be ashamed, rightly dividing the word of truth.” 2 Timothy 2:15

William “Bill” Erving Curtis, Jr., age 91, of Elizabethton, passed away peacefully on Sunday, November 19, 2017 at his residence. Bill was born on June 26, 1926 in Elizabethton, Tennessee to the late William E. and Christine Kyte Curtis, Sr. In addition to his parents, Bill was preceded in death by his wife, Selma Nave Curtis; three sisters, Anna Sue Curtis, Mary Catherine Llewellyn and Patsy Swartz; and one brother, Pat L. Curtis.

Bill spent most of his youth growing up in the Wilbur Dam “Horse Shoe” Community, where his grandfather and father operated Wilbur Dam. This community, its history, and beauty remained dear to Bill throughout his life. He enjoyed hiking its mountains, its scenic nature, and sharing its history with those he met. Bill was devoted to his family and church. Bill served for many years at Immanuel Baptist Church, but later became a member of the Old Horse Shoe Freewill Baptist Church, where he was a deacon. He had a special love for this church and his church family.

Bill was retired from North American Rayon Corporation, after 35 years of service, where he had been a power house operator and supervisor. Bill was also a United States Navy veteran. He joined the Navy in 1944 and was assigned to the U.S.S. Frankford, a destroyer. Bill completed nineteen months of duty, during World War II.

Those left to cherish his memory include his daughter, Deborrah Holmes (Jim); a grandson, Curtis Armstrong (Kyla); three great grandchildren, Reagan and Bo Armstrong and Kyden Jones; a daughter-in-law, Stephanie Armstrong; a sister, Winfrey Curtis; and a sister-in-law, Clara Curtis. He was “Uncle Bill” to several nieces and nephews.

The family would like to express appreciation to the staff of Amedisys Hospice. Special thanks to Christa Hall, Debbie Hinkle, Milissa Baumgardner, Shane Casey and Jerry Lawson, who were devoted to caring for Bill.

In lieu of flowers, it was Bill’s wish that donations be made to his beloved Old Horse Shoe Freewill Baptist Church, 728 Wilbur Dam Road, Elizabethton, TN 37643.

The family will receive friends at Tetrick Funeral Home, Elizabethton on Tuesday, November 21, 2017 from 11:30 AM until 12:30 PM. A graveside service will follow at 1:00 PM at Happy Valley Memorial Park with Pastor Norman Loveless, officiating. Active pallbearers will be special friends from his church family.

Online condolences may be shared with the family online www.tetrickfuneralhome.com. Mr. Curtis and his family are in the care of Tetrick Funeral Home, Elizabethton. 423-542-2232, obituary line 523-543-4917.