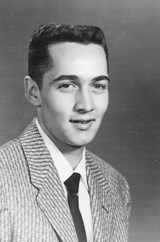 Born 05/17/1941, Bill was a son of the late William Harlan Horton and Mary Ada Harrison Horton.

He lived and worked in several cities but had made his home in Elizabethton for the past several years. Bill was a native of Hampton, TN and played on the varsity basketball team for the Hampton Bulldogs. After graduation in 1959, he attended ETSU and then received his BS in engineering from Eastern Carolina. One of Bill’s great accomplishments was having been on the developing end of the Patriot Missile at Martin Marietta in Florida. He worked at several other places which included: teaching industrial trades in Chase City, Virginia, Univac, Raytheon in Bristol, Martin Marietta, RCA, Columbus Electric, North Electric, Magnavox, Air Maze, and G&W Window Manufacturing in Elizabethton.

After retiring, Bill enjoyed model trains, UT and Tennessee Titan Football games and was an avid automobile antique enthusiast. Bill enjoyed researching the history of Hampton and the people by talking with senior friends and neighbors.

The family wishes to thank Agape Rehab and Nursing Home staff for the care provided to Mr. Horton for the last few weeks.