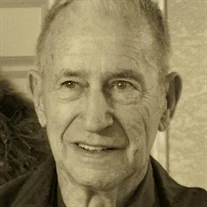 William Gerald “Bill” Carter, age 91, of Johnson City, TN passed away at his residence in the early morning hours of Saturday, July 27, 2019. He was born July 6, 1928 to William Alexander Carter and SueElla Price Carter in Buncombe County, NC.

He was preceded in death by his wife of fifty-seven years, Margaret Ferren Carter. Also preceding him in death were his sisters, Doris Carter McLaney, Marcella Carter Townsend and an infant grandson, Bryan Foster.

By his side to the very end was his beloved dog, Pogey.

Bill’s lifelong hobby was gardening and sharing the bounty with his friends and neighbors. He loved going to listen to music at the Red Barn. As long as his health allowed he visited the sick and shut in and took them communion. He was a charter member of the Central Community Volunteer Fire Department.

He was an elder and charter member of King Springs Church of Christ. He was employed by North American Rayon Corporation in Elizabethton, TN. He was a more than sixty year member of the Masonic Lodge.

The family would like to give heartfelt thanks to Dr. Michael Grosserode for his skilled and compassionate care. Also, thanks to Amedysis Hospice for the comfort given during his final illness.

A service to honor the life of William Gerald “Bill” Carter will be conducted at 3:00 P.M. Monday, July 29, 2019 in the Chapel of Peace of Tetrick Funeral Home, Elizabethton with Mr. Jon Ruetz officiating. The family will receive friends at the funeral home from 2:00 – 3:00 P.M. on Monday prior to the service.

Interment will follow the funeral service on Monday, July 29, 2019 in Happy Valley Memorial Park with Masonic services. Active pallbearers will be his grandsons, Michael Jones, Gregory Jones and Matthew Foster along with Zachary Adams, Jerry Cross and George Williams.