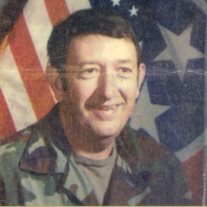 Mr. William H. “Bill” Bowling, 72, of Elizabethton, went home to be with his Lord on Monday, July 7, 2014 at Sycamore Shoals Hospital following a brief illness. He was the son of the late Bill and Anna Mae Luttrel Bowling and was born in Carter County. In addition to his parents, he was preceded in death by his wife of forty-six years, Linda Faye Holder Bowling, on January 7, 2009.

Mr. Bowling was retired from the Tennessee Army National Guard with forty years of service. He was a Veteran of the United States Army and attended East Side Freewill Baptist Church. He was a salesman who worked at several different auto parts companies.

The funeral service for Mr. Bowling will be conducted on Wednesday, July 9, 2014 at 7:00 PM in the Riverside Chapel, Tetrick Funeral Home, Elizabethton with Rev. Justin Deaton officiating. The family will receive friends in the funeral home chapel from 5:00 – 7:00 PM on Wednesday prior to the service.

The graveside service and interment will be conducted on Thursday, July 10, 2014 at 9:00 AM in Happy Valley Memorial Park with Rev. Sam Nichols officiating. Military honors will be accorded by the Carter County Honor Guard. Honorary pallbearers will be R.L. Hambrick, Joe Williams, Ralph Simmons, Lester Julian, Larry Moe Presnell, members of the Tennessee Army National Guard, fellow employees of NAPA, and Joe William’s Adult Sunday School Class of Eastside Freewill Baptist Church. Those wishing to attend are asked to meet at the cemetery at 8:50 AM on Thursday.