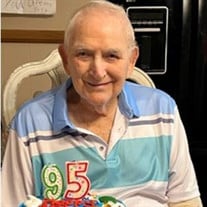 Bill was born in Elizabethton, Tennessee, but made Johnson City his home and place of business for over ninety years. He was the son of the late Mayland “Ducky” Muse and Valarie Muse Ferguson, step-mother Thelma “Suze” Muse and step-father Guy Ferguson, Esquire.

Bill graduated from Science Hill High School in 1945. After graduation, Bill enlisted in the United States Navy, serving as a Machinist’s Mate, Third Class on the USS Bennett destroyer during World War II, where he was awarded the Victory Medal and American Theatre Medal. He was honorably discharged at the end of WWII. Following his military service, Bill attended the University of Tennessee where he studied architecture and mechanical engineering and was a member of Phi Kappa Phi Fraternity.

Bill worked in the family business, Muse Incorporated, until he became an entrepreneur. He started East Tennessee Sprinkler Company Inc. and never looked back. He ran the company over forty years alongside his wife, Erma. In addition, his two children Bill Jr. and Sherrye did whatever was needed to assist with building the company. He served as president of the Tennessee Fire Sprinkler Association for five years and worked cooperatively with numerous fire protection agencies and private businesses throughout the state of Tennessee.

Upon retirement, Bill enjoyed playing Putt-Putt, winning over one hundred tournaments. He enjoyed watching golf tournaments and baseball, especially the Atlanta Braves and the Cincinnati Reds. He was also a member of Johnson City Senior Center’s Musical Voices, lending his beautiful voice to the group as they performed at events across the region. He also enjoyed his many extended beach trips over the years to the Gulf Coast of Florida where he could feel the gulf breeze daily and watch the sunset nightly.
In addition to his parents, Bill was preceded in death by his wife of 54 years, Erma Morefield Muse, his half-brothers, Johnny and Mickey Muse.

Bill was not only beloved by his family, but also by many friends, business associates, and colleagues throughout the state of Tennessee. He was a devoted husband, father, grandfather, and great-grandfather, and was affectionately known by many as “Poppy.” Bill dedicated his life to others during his career by ensuring the community’s safety through fire protection, and in other aspects of his life by wearing a welcoming smile and meeting everyone he encountered with a joke.