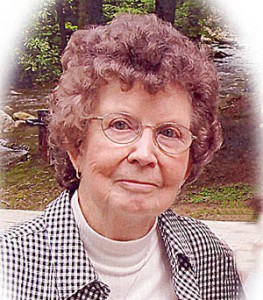 She was a native of Carter County and the daughter of the late Hobart and Lula Morris Cole. In addition to her parents, she was preceded in death by her husband, Jack N. Honeycutt, on March 6, 2007; a brother, Chester “Buddy” Cole; and a grandson, Sgt. Jacob Matthew Honeycutt, on March 4, 2012.

Mrs. Honeycutt was a retired sales clerk from Watson’s in Elizabethton and a member of First Baptist Church of Elizabethton.

The Celebration of Life service for Mrs. Honeycutt will be conducted at 8 p.m. Tuesday, October 2, in the Riverside Chapel of Tetrick Funeral Home, Elizabethton, with Rev. Brent Seals officiating. The family will receive friends in the funeral home chapel from 6 to 8 p.m. Tuesday, prior to the service, and at the home of a son and daughter-in-law, David and Shirley Honeycutt, 135 Midnight Drive, Elizabethton, at other times. Music will be under the direction of Glen Gouge, Tonya Hughes, John Bunn and Renee Hutsinger. The graveside service and interment for Mrs. Honeycutt will be conducted at 11 a.m. Wednesday, October 3, at Happy Valley Memorial Park. Active pallbearers will be Chris Honeycutt, Jesse Honeycutt, John Moore, David Hazelwood, Ronnie Hazelwood, Luther Oliver, Dewey Renfro and Doug Colbaugh. Honorary pallbearers will be Herman Colbaugh, Roe “Junior” Hodge, Jerry Harper, Glen Gouge, Lacy Hollow neighbors and friends, co-workers at Watson’s/Peebles, and members of First Baptist Church of Elizabethton. Those wishing to attend are asked to meet at the funeral home at 10:15 a.m. Wednesday to go in procession to the cemetery. The family would like to express a special thank you to Drs. James and Michelle Davenport, Dr. Jonathan Bremer and the entire staff of Ivy Hall Nursing Home and Caris Healthcare for all their excellent care. In lieu of flowers, donations may be made to Army Emergency Relief Fund, Military Families for Army Relief at WWW.AERHG.ORG in honor of Sgt. Jacob Matthew Honeycutt. Online condolences may be sent to the family by visiting www.tetrickfuneralhome.com and signing the guest book or by fax to (423) 542-9499.